For support regarding any of our industrial water products and services, please contact a Nancrede Representative. 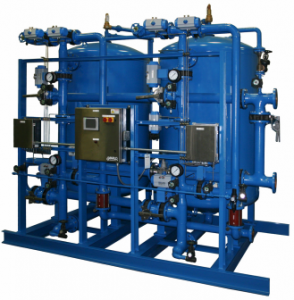 Most commercial and industrial water softeners operate in alternating mode, having one softener tank online while the other softener tank is offline. This mode of operation creates an environment that fosters hardness leakage, increased operating and environmental costs, salt waste and a higher chance of nonperformance due to having a single point of failure. (Looking for even more risk reduction? See our three-tank water softener solution: the 3-tank Zero Hardness™ Softener.) 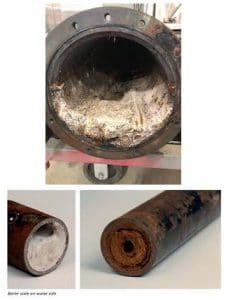 With the double pass, worker polisher design, both softeners are online all the time, which reduces risk of poor water quality shutting down or limiting your process. If one softener tank were to fail, the other tank would still soften the water with no lack of soft water at any time. This effectively eliminates the largest single point of failure common in standard softener systems.

Better performance, zero hardness and higher efficiency can be achieved by having both water softener tanks online all the time passing through one softener then a second. Lower and more efficient brining rates can achieve water quality similar to that of higher brining rates by having the first softener remove most of the hardness and the second polish the water. Most large industrial and commercial water softeners are regenerated with 15 pounds of salt per cubic foot of resin. Higher water quality is obtained than with lower salting rates, but efficiency is lost. Using a lower brining rate but flowing in a worker polisher design can cut back salt consumption upwards of 40%, while still reducing hardness leakage and water consumption. The double pass, worker polisher design of this new patent pending softener system design offers the following performance advantages in regard to hardness removal and efficiency.

For high flow rate scenarios, the polishing softener can be pulled online so the system runs in parallel regardless of which unit is in lead or lag (worker or polisher) position to satisfy peak flow rates. When flows reduce back to normal levels, the system returns to a double pass configuration. The system is bi-directional, meaning either softener tank can be in the lead or lag position.

The Zero Hardness™ failsafe softener system doesn’t have these disadvantages as neither softener is ever offline. Hardness leakage from the lead softener is removed by the polishing softener. This, paired with special materials of construction and dead leg minimization piping design, results in minimal potential for hardness leakage and softener failure to ensure your production is never shut down or compromised by high hardness in your process water.