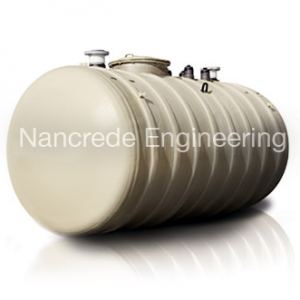 The Nancrede Engineering Double Walled Underground Bulk Brine and Salt Tank Storage Systems are designed to work seamlessly with your industrial water softener system or processing plant to drastically reduce salt costs and remove liability from injury due to loading salt into a brine tank or salt tank storage system. Reduce salt to the drain by up to 75% with our industrial softener salt recycling system!

As an engineering company, not a salt company, our focus is on designing the best underground briner and salt tank storage systems to integrate with your industrial water softener or process in your new or existing building. We also offer above ground bulk brine systems and salt tanks and can consult on which salt brine storage and equipment options work best for your facility. Ideal applications for bulk underground briner storage systems include any facility with high salt consumption or management who doesn’t want to put their team at risk for injury from salt storage loading.

Buying and storing salt in bulk will reduce salt and labor costs dramatically. And with minimal design changes to a new or retrofitted industrial softener system, up to 40% of salt costs can be saved while reducing water consumption. This is not only good for your bottom line, but it’s the right thing to do for the environment.

Many customers choose underground salt brine makers because they don’t have the space above ground, or they don’t like the aesthetics of above ground bulk briner systems. The largest challenge of an underground brine storage and generating systems is environmental risk. You can’t see them, and you can’t see if there is a failure.

Our double walled salt briner equipment systems employ a double walled containment system with leak detection. If there is a breach in the brine system, it will be contained in the second tank and there will be an alarm to notify staff to investigate, nearly eliminating high environmental and legal costs of leaking thousands of gallons of salt brine into the soil. We also offer single walled bulk brine systems for a slightly more economical solution.

As stated above, we are an engineering company, not a salt company.  Our focus is on implementing systems that seamlessly integrate into your industrial water softener system(s) or processes.  Our goal is to reduce your brine, salt and water costs while simultaneously reducing your carbon footprint.  We can also integrate with your existing softener or process for an alarm to notify you if your softener or process has a potential failure so you can focus on your core business and not worry if your brine or softener storage system is working correctly.

Our Underground Briner and Salt Tank Systems include automatic brine level controls, with emergency bypass, so you don’t have to worry about adding water to the underground bulk salt system.

Submersible brine pumps can be used in lieu of the brine distributor if external bine pumps are not available or desirable.

Down flow brining ensures consistent, high quality brine saturation. As fresh water rises, the higher density salt water sinks. Dirt and sludge from the salt is captured at the bottom of the tank and needs to be removed periodically.

Our tough, double walled, fiberglass reinforced plastic shells are constructed to maximize the life of the system.

In many underground briners, inlet water is not distributed evenly. Results are often the formation of salt pillars in the tank These can break and damage the system. We eliminate this with a header the length of the tank.

Salt is loaded pneumatically and has an air vent and bag collection system that produces minimum dust emissions. The connection is a 4″ 304 stainless steel pipe, which is fitted with an aluminum camlock coupling and cap that adapts to a P/D salt truck hose connection. Further salt dust suppression can be added by injecting water during salt unloading, resulting in further minimization of dust emission.

All Underground Bulk Brine Systems are fitted with a top-mounted, man way.  This port is used for periodic sludge clean-outs.  Every three years is standard but this depends on salt type and quantity of salt used.